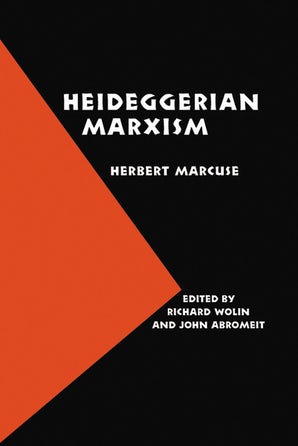 Publisher's blurb:
Marcuse studied with Martin Heidegger at Freiburg University from 1928 to 1932 and completed a dissertation on Hegel's theory of historicity under Heidegger's supervision. During these years, Marcuse wrote a number of provocative philosophical essays experimenting with the possibilities of Heideggerian Marxism. For a time he believed that Heidegger's ideas could revitalize Marxism, providing a dimension of experiential concreteness that was sorely lacking in the German Idealist tradition. Ultimately, two events deterred Marcuse from completing this program: the 1932 publication of Marx's early economic and philosophical manuscripts, and Heidegger's conversion to Nazism a year later. Heideggerian Marxism offers rich and fascinating testimony concerning the first attempt to fuse Marxism and existentialism.

These essays offer invaluable insight concerning Marcuse's early philosophical evolution. They document one of the century's most important Marxist philosophers attempting to respond to the "crisis of Marxism": the failure of the European revolution coupled with the growing repression in the USSR. In response, Marcuse contrived an imaginative and original theoretical synthesis: "existential Marxism."