Preface to Towards a Critical Theory of Society 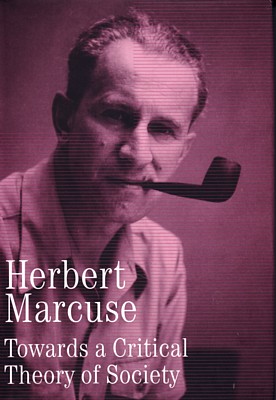 In reading these largely unpublished manuscripts of my father’s, I am struck by two things. The first has to do with the relationship of current events to long-term analysis that the selections in this volume, in particular, reveal. The second has to do, superficially, with style, but, more significantly, with the thought processes that the style reveals.

Most of these pieces were composed (some for talks, others as draft manuscripts) during the Vietnam war, as my father actively engaged himself in the day-to-day protest against it. His contribution was not particularly to marshal the arguments against the war, but rather to put it in the broader framework of developments in the economy of capitalism, in bourgeois democracy, and in the possible forms of resistance. Some of his judgments as to the extent of developments may seem today, with hindsight, to have been in part erroneous: the extent of formal repression, the inability of the economic system to continue to produce. But the underlying analyses still ring very true I would argue it is perhaps even more important today to develop a radical social critique, perhaps because the day-to-day conflicts today are not as sharp to the point of sometimes pre-empting the analysis as they, perhaps, were then. [several sentences later inserted here]

Above all, the theme that runs through virtually everything in this volume is the importance of the political, the fight against the depoliticization of all spheres of action, from academic economics to culture to politics itself. In later work, to be published in a subsequent volume in this series, he dealt explicitly with what the political content of art was, rejecting the view that art to be political should be ornamented propaganda; there are hints even in the present pieces of his developing absorption in the role of art. But here he is concerned with the sources of social change, and sees in the growing material prosperity that capitalism has produced an increasing dehumanization that needs to be addressed in moral terms, and that means in political, rather than narrowly economic, struggle. The new preface to Eros and Civilization is called "Political Preface," and ends: "Today the fight for life, the fight for Eros, is the political fight." It is a moral and a political position that is grounded in a sharp theoretical analysis of current developments, and holds up well even where current developments have not gone entirely in the direction he anticipated.

As to style, I remember often, on first reading something he had published, swearing at the ambiguities of many phrases. I was trained as a lawyer, and sharpness of expression, precision, clarity, are highly prized, terms are given specific definitions, conclusions are drawn sharply and pressed one-sidedly. The result is often complex sentences, multiplication of qualifications to simple statements, difficult and inelegant reading, but, if the effort succeeds, clear and unambiguous results. Reading the Internal Revenue Code is tough going, but any lawyer would defend it as an attempt to state very precisely what is and what is not taxed, under what circumstances, with what exceptions, for what type of entity, when, and how.

My father’s writing (and speaking) were, to my then professional eyes, quite the opposite. One trick he often used was to say the same thing two or three different ways, to add to a noun another noun, separated by commas, or added parentheses: "relations between things have become rational (or rather: are rationalized)." OK, but if you mean rationalized, why not say it in the first place? Because he wants first to present the appearance, then contrast it to the reality.

"American culture is still sometimes described as a �death-denying culture� � nothing could be further from the truth. Or, rather, the neurotic death-denial hides the profound �understanding� of death." [Historical fate, p. 22 ms] Well, which, asks my lawyerly training, is it or isn’t it death-denying? Well, of course, the answer isn’t a simple "yes" or "no"; it both is and, at another level, it isn’t. This is not careless writing; it is writing that accepts contradictions, subtleties, ambiguities.

In other cases, the style exposes the content more directly: "the struggle against [aggression]� involves, not the suppression but the counter-activation of aggression." [Historical Fate, ms. P. 25. I have elided, I think not unfairly, to make the point sharper.] A paradox? Yes, indeed, but a substantive paradox. An inconsistency in thinking? By no means.

Or: "modes of existence rendered possible and at the same time precluded by the given society." Both at once? Interesting; yes, that is exactly what he means.

Or: "�one of the most vexing aspects of advanced industrial civilization: the rational character of its irrationality."

Or: "� by values� I mean norms � which motivate � behavior. � In this sense, � they express the exigencies of the established production relations� However, at the same time, values express the possibilities inherent in but repressed by the � established society." Well, asks the frustrated lawyer, who wants a word to mean one thing and one thing only, make up your mind, in which sense are you talking? The answer is: both, and the tension between them a dialectical tension, runs throughout the essay on values printed here.

It is a style that accepts ambiguities, that indeed sees contradictions within concepts, multiple dimensions within single acts and events; a style one might indeed call dialectical writing. For it is not, I would now say, unclear, and certainly not sloppy. Rather, it reflects the ambiguities and contradictions of reality, the fact that events in fact have multiple meanings and multiple outcomes, some inconsistent (or rather: in tension � the style is catching!) with others. Sometimes, I have the feeling, my father formulated the contradictions deliberately for their shock value: what’s new in bourgeois democracy is "(a) the strength of its popular base, and (b) its militant reactionary character." [Historical Fate, ms. p. 34] Sometimes the formulations are striking precisely because they appear to be oxymorons ("civilized barbarism", "profitable bondage," "repressive affluence"), or simply logically absurd ("the revocation of the Ninth symphony," "occupation without work," "facts which are substantially incomplete"). The unusual form of the statement forces the reader to stop and think, and, with effort, the meaning then becomes clear.

In part, I am led to these reflections by the very physical form of the manuscripts reprinted here. Remember, they were (almost all) unpublished; yet, even those that were merely one lectures among a whole series of high profile appearances, the text is written out, revised, re-revised, with cross-outs and insertions. My father never published, nor authorized the publication, of anything he did not carefully read; his note on the Meyerhoff lecture, for instance, indicates his dissatisfaction with anything but a perfected version of what he wanted to say. He often reviewed, and struggled over, translations of his articles, in German or in French, where he felt he had a sense of the nuances of the languages. He quite generally denied permission to reprint portions only of articles or books, feeling his thoughts needed to seen in the full context of what led to them and followed from them, not in isolation or out of context. I must admit I have not followed what might well have been his wishes in allowing the publication of pieces such as those in this volume, and occasionally authorizing the publication of excerpts rather than complete pieces where I felt the context did not distort, for I feel that any reader seriously enough interested to read this volume will also be familiar with the more perfected pieces, and the train of thought that led to those published pieces may itself be of value to others today. What was really ephemera, what my father really thought was of no value, he threw away; he was not a archivist, did not see his processes of work as of historical interest, and he tossed out drafts that today we might find of extraordinary interest.

But my father has become, when all is said and done, a significant figure in the history of his times, which are still our times. His ideas, including their genesis and reworking, are I think both of historical and of real contemporary interest. In any event, that is how I justify and why I recommend the present collection.